The Trans-European Networks for Energy (TEN-E) Regulation No 347/2013 was adopted with the purpose of covering investment in energy infrastructure, notably large projects at transmission level. The initial aim was to support the completion of the internal energy market by promoting the development of cross-border projects that would help with geographic integration of the market.

The European Green Deal shifted that priority: alongside the aim of developing the internal market’s hardware, the main objective is to support the full decarbonisation of EU economy by implementing innovative technologies and integrating the energy sector, as well as increasing its links with digital and transport systems.

Representing leading distribution system operators in Europe, E.DSO and its members are committed to rolling-out and maintaining a high-class infrastructure to European citizens. By guaranteeing reliability and quality of electricity supply in an interconnected Europe while substantially contributing to the EU’s climate agenda and decarbonisation objectives (90% of RES generation is connected to the distribution grid), DSOs have a key role to play in the future Trans-European energy networks.

E.DSO welcomes the Commission’s proposal for revision of the Regulation (EU) No 347/2013 (the ‘TEN-E Regulation’) and several positive developments contained therein. However, we have identified some inadequacies and proposed several adjustments to make the TEN-E Regulation fully in line with the climate neutrality goal.

Discover the content of our position paper by downloading the document. 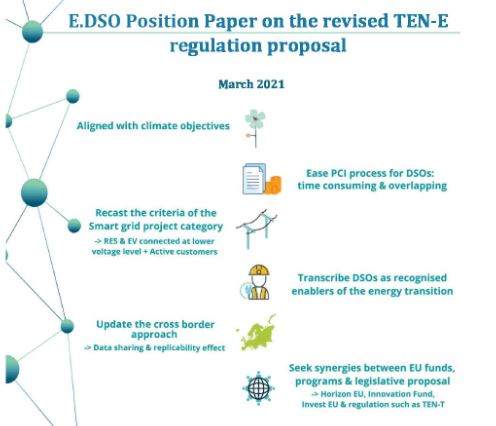