E.DSO, as the trusted voice of the leading European Distribution System Operators (DSOs) industry and the representative of more than 350 million connected customers, welcomes the Fit for 55 Package as an instrument to equip the EU’s economy for climate neutrality.

We appreciate that DSOs have been recognised in the Fit for 55 package as important actors in the energy transition responsible for the integration of renewables and the management of an integrated energy system with increasing electrification and customers at its core. Nevertheless, we consider the package must recognise a more relevant role of DSOs within the new regulatory environment to facilitate the energy transition and to contribute to the EU’s climate objectives.

In light of the above, E.DSO would like to make some suggestions for regulatory amendments to the four legislative files that most directly impact electricity distribution system operators:

Those amendments are based on the well-thought-out reflections of E.DSO experts and we remain at policy makers’ disposal to discuss further in detail the development of an energy system fit for the EU’s climate objectives.

For more information, you can consult E.DSO Position Paper on the Fit for 55 package and E.DSO Policy Podcast Series. 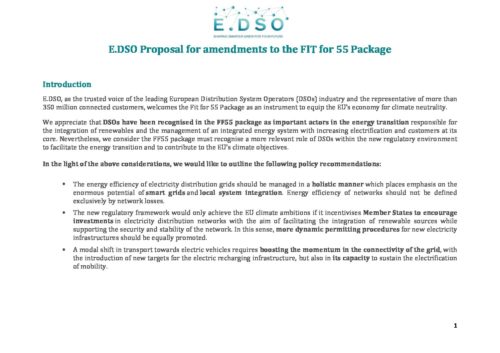